Aquila historical rosin scrupulously follows the indications of an Italian-recipe dating to the mid 18th century. Here it is installed in this padock wood Rosin Holder, created by String King. Sooner or later (often sooner) the rosin brakes into pieces and you have to throw it away (and a large part of money you paid for it).

The size of the rosin varies, so this Holder is a bit larger. You can fill the space between the Holder and the rosin with soft material, so it stays stable inside. 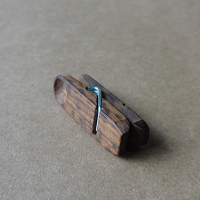